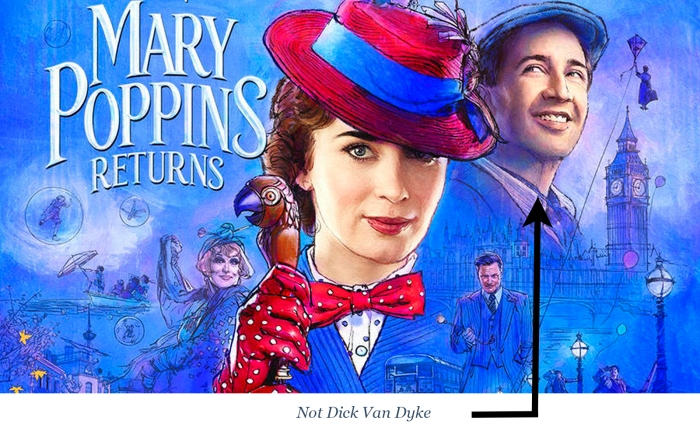 It’s not exactly a secret that I don’t like musicals.  If they’re live, I find musicals almost unbearable. But there are a handful of movie musicals I do like.  The Wizard of Oz (and its gloriously bizarre companion, The Wiz), Singing in the Rain, The Sound of Music, Grease, Moulin Rouge and that’s about it. Oh, and Mary Poppins.  All of these have great music that sticks with you, and other than Grease, fairly layered stories with an interesting point of view conveyed by relatable and complex characters tied up in an engrossing plot.  Sorry, Grease, but you’re ridiculous. But the goddamn music is so good. And none of them, for the most part, sing their dialogue.  That particular conceit is an affront to good music, good storytelling and good taste.  And part of the reason I absolutely loathe Rent.

Which makes Mary Poppins Returns so disappointing.  None of the musical numbers stick with you.  Music is often a subjective art-form, so maybe it was just me, but I found the songs to be bland parallels to the vastly superior music from the original.  If the music had been outstanding, I could have forgiven the fact that Mary Poppins Returns, much like The Force Awakens, went to great lengths to retain all the same elements that made its predecessor a success.  And in doing so in such a rigid manner, managed to produce a sequel that feels more like a remake than a continuation. I find it frustrating that the film’s production team didn’t have the courage and conviction to make a true sequel. But instead hedged their bets, making a film that ensures Mary Poppins fans engage with a familiar brand, to steal a bit of ad speak from the marketing world.  Added to which, new audiences will almost undoubtedly love it, since they’re cribbing all the major beats from the original, which is still hugely popular.  It’s a disservice to the author of the books and it’s a disservice to the fans who, for $15 deserve a movie that’s earned its spot in the film universe of Mary Poppins. And I feel certain there is to be a Mary Poppins film universe beyond this one.  Again, much like The Force Awakens, Mary Poppins Returns felt like a big toe dipping into a pool to test the temperature before the inevitable next film cannon-balls in and kicks the franchise off proper.  And in doing so, robbing the movie-going public of a good film, or at least a respectable sequel.  Which certainly is not impossible. Case in point:  The Color of Money, the sequel to The Hustler made and released 25 years after the original.

I’m dating myself a little bit, leaning on a 32 year old film that itself was a sequel to a 57 year old film.  But it is the best example I can think of of a long-gap sequel that was a true continuation of a story, taking it in a whole new direction, with confidence and total originality.  The Color of Money was directed by Martin Scorcese and brought together two of the biggest Hollywood stars of their respective generations in Paul Newman (reprising his role of “Fast Eddie” Felson from the first film) and a young Tom Cruise whose star was still on the rise. The great thing about The Color of Money is that it is totally self-contained.  You do not need to see The Hustler to understand and enjoy The Color of Money, but if you do, then The Color of Money takes on a whole new level of complexity that I found completely fascinating as a self-proclaimed movie geek, and card-carrying member of the human race.  The Color of Money won Paul Newman his first Best Actor Academy Award (on his 7th acting nomination – he would be nominated twice more for acting subsequent to TCOM) and was nominated for three others. I suppose one could argue that comparing a film directed by a film legend, Martin Scorcese and a film directed by Rob Marshall, the guy who made Pirates of the Caribbean: On Stranger Tides isn’t entirely fair.  To that I would say, why not get a film legend to make a Mary Poppins sequel then?  Just because the guy was hugely successful in musical theater doesn’t mean he can make a good movie.

No, Memoirs of a Geisha does not count. It’s perhaps the single most expensive soap opera ever filmed.  Not a compliment.

Ok, so I didn’t like the music, story or director.  I did, however like Emily Blunt.  A lot. She’s pretty goddamn perfect.  I can think of zero fault of any kind in her performance. I’ve been trying to imagine who might have been a better choice for the role and I can think of nobody.  It’s inspired casting, a role she was practically born to play.  Which, again makes it all the more disappointing that the film played it so safe, to the point of boredom.  Yeah, I fell asleep for a little while in the middle.  Even Emily Blunt couldn’t keep me conscious through that utterly irrelevant and odd-ball (not in a good way) scene with Meryl Streep, who channels the voice/accent of her character in Sophie’s Choice, of all the films to call attention to when performing in a Disney musical ostensibly for kids. The rest of the cast were excellent.  I just wish they had a more interesting script to work with.  I will make one exception though… I really did not like Lin-Manuel Miranda. Full disclosure, Lin-Manuel Miranda is a performer I simply do not like.  Can’t put my finger on it… he just bugs me.  In Mary Poppins Returns he’s the obligatory Dick Van Dyke/Bert fill-in and honestly, he was never going to hold a candle to Dick Van Dyke.  The fact that they even tried is perplexing.  Added to which, Miranda is mostly of Puerto Rican descent.  It’s hard to forget that when watching him speak and sing in a cockney accent. It’s kinda like trying to suspend disbelief when watching Charlton Heston try to play a Mexican character in Touch of Evil.  Or perhaps a more relevant example, when Rob Marshall cast three Chinese actresses to play Japanese characters in Memoirs of a Geisha. There we go, full circle.

It would be cynical to write an entire review without admitting that I did smile a lot throughout the film.  It’s lighthearted throughout with small doses of heartfelt sentiment revolving around parenthood and the struggles of carrying on a family after the death of a spouse. I just wish it had been created with more ambition.  Retreading familiar territory is the cardinal failing of so many sequels these days.  I was really hoping they would take this one in a more interesting direction.  Maybe the next film in the inevitable series will.